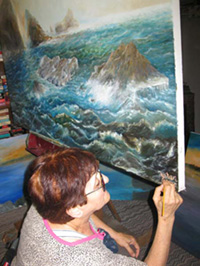 Yeran was born of Armenian parents, Zareh Kassabian and Azadouhi, in Beirut, Lebanon.  Baptised in the apostolic church and named after her paternal grandmother, Yeranouhi, according to Armenian custom at that time, Yeran was faced with misfortune early in life.  For unknown illness, Yeran lost her mother only two months after she'd been born.  Shortly after her mother's passing, Yeran was placed in the care of Catholic orphanages, where she spent the majority of her adolescent life.

At an early age, Yeran was very timid and unsociable.  She shunned the company of her friends and students in order to be left alone to devote herself to reading and drawing.  As her her skills developed, the school nuns took notice of her abilities early on and encouraged her.

"While I never had an opportunity to study painting there (the orphanage), I recall a time when I was around eight year's old.  I'd drawn a crucific on a tree by a lake on my bedroom wall.  I ended up getting punished for ruining the wall, but was awarded canvases and paints." recalls Yeran as she sits in her now Fresno studio remembering her early childhood.

"Even though I was forced to paint only religious pictures, I was happy because I was doing what I loved most"  stated Yeran.  In 1958, still a young child, one of Yeran's paintings was entered in a children's art exhibition in Lebanon.  She was awarded first place among several children throughout the country.  Later that year, one of her seascapes won first place in international exhibition of children’s art.

From an early age, Yeran was fascinated for the movement of the waves at the sea, the colors, the smells of the salty water, and the sounds of the ocean.  In 1970 again near her beloved sea, Yeran immigrated to the United States and settled in San Francisco, California, seeking to further develop her painting techniques.  In 1974 she was awarded first place in an exhibition at the San Francisco Academy of Art. The exhibition depicted the works of more than 400 artists.  As a result, Yeran was awarded a summer scholarship from Academy of Art in San Francisco.  After her studies, little changed in her mastery of depicting the great variety of moods expressed in the contact of the sea and shore. In the late 1970's and 1980's, Yeran served as a member of Western Art Association where her work was introduced in throughout the U.S. and Canada, where her Storym Ocean (48” by 72” oil on canvas) took first place.

The present number of paintings depicts well her mastery of sea and sky, as well as an expanding in nature as the she sees it ever close to the sea.